Click Here to watch this scene on You Tube
Our family started bright and early and drove to the Martin Guitar Factory for a tour. After lunch, we stopped at Lehigh University to see the Drinker House. Click Here to learn more about the dormitory.
Thanks to Ross Reilly for the wonderful music. Check out his myspace. 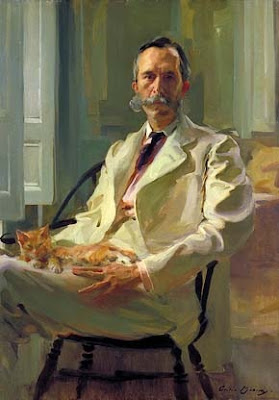 The Man With The Cat (Henry Sturgis Drinker)
by Cecilia Beaux
Below is Lehigh's biography of Dan's great great grandfather:

Henry Sturgis Drinker (1905-1920) was an 1871 Lehigh graduate and the only alumnus ever to become president. The alumni endowment fund was established in 1907, the Lehigh Alumni Bulletin was first published in 1913, and the Alumni Association was incorporated in 1917.
A lawyer and a mechanical engineer, Drinker helped solve the problems of building the two-mile-long Musconetcong Tunnel, an engineering feat that made possible a railroad line between Easton, Pa., and New York City. He started a tradition of business-like management of university affairs.
During Drinker's years, more buildings were completed: the original section of Fritz Engineering Laboratory, Drown Hall, Coxe Mining Laboratory, Taylor Hall, Taylor Gymnasium and Field House, Taylor Stadium and Lamberton Hall. Drinker's interest in horticulture led to the planting of many rare trees and plants.
A teacher's course and a business administration course were begun in 1909, and in 1918, the university was divided into three colleges: liberal arts, business administration and engineering - roots of today's colleges. Army ROTC was established in 1919.
Drinker's daughter, Catherine Drinker Bowen, became a historical writer of note. Her experiences as the daughter of a Lehigh president and occupant of the President's House are recorded in Family Portrait (Atlantic Little-Brown). 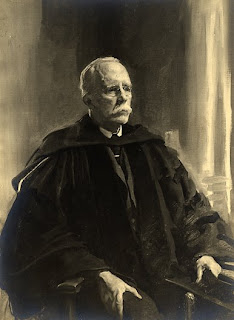 This is a short excerpt from the Pennsylvania Magazine of History and Biography:
While Henry was apparently interested in Cecilia, she was never taken with him. On one occasion she had been away from home when Catharine and Henry dropped by for a visit. She later noted in her diary "I don't mind missing him." Diary of 1875, Beaux Papers
Tara Leigh Tappert
Posted by The Drinker Brothers at 11:47 PM

I bet that there aren't very many overweight people that attend that school with all of the hills they have to climb! (Or maybe they just use their cars)-What a pretty campus.

I just stumbled across your blog and had to comment...I work at Lehigh, and most people try not to deal with the hills. Staff and students alike usually take the bus or drive where they need to go - sometimes its just easier!

Oh I dunno, those Drinkers seem to be handling those stairs pretty well. Sorry we haven't been checking in regularly enough, but glad to see you all looking so fit!