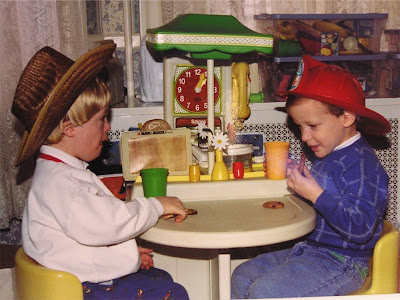 Will must have been maybe 2 or 3 and I guess Dan was a year older. We were all at Grandmom and Grandpop's old house on Graver's Lane and it was around Easter (Alex and I lived in Chicago at the time). Will was still very sick from all of his early surgeries and understandably terrified of any type of mask. Someone had brought a whole bunch of bunny masks for us kids to wear and Will became afraid. Dan leapt into action as his younger brother's protector, somehow simultaneously comforting Will while at the same time berating whoever had brought the mask. I don't know why I remember this, but it was so sweet and so obviously instinctual and Will seemed very much secure in the knowledge that his big brother Dan was going to take care of the problem and make everything better.

My second memory of Dan is after Grandpop died. I guess we were all gathered again and I must have been particularly upset. Dan came over to me and gave me the most loving, gentle hug and just softly kept saying, "It's okay, Grandpop in heaven" and it really did make me feel so much better.
Lauren Drinker
(Dan's Cousin)
Posted by The Drinker Brothers at 6:02 PM

I just stumbled on your blog; I had a baby who has special needs (Noonan's Syndrome) this year and your story is such a blessing.