A Letter From Unruh Street 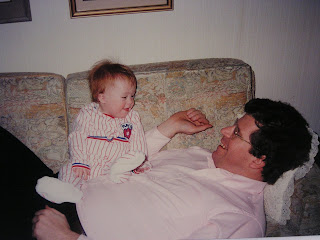 Here is a letter my Dad wrote.
June 19, 1990
Dear Sandy,
Here's a couple of stories for you.
My son Daniel, age 5, has Down syndrome and has captured the hearts of friends and family, in fact, the hearts of everyone he meets.  But, through him we have learned that it is our own hypersensitivity that often handicaps us, sometimes hilariously.
We have a friend, Ellen, who's son, Jimmy, also has Down syndrome.  Once Jimmy was about a year old his mother was strolling him down a hallway in a medical office building and encountered a stranger coming down the hall.  The stranger kept looking down towards the stroller as he approached the mother and child from the opposite direction.  Ellen was certain that the man was staring at Jimmy and she became more and more incensed as the distance between them shortened.  Finally, as they passed each other, Ellen shrieked at the man, "What are you staring at?".  The man shook his head, and as he walked on said, "Jeez lady, I was just  going to tell you that your shoe was untied!"
Another episode we laugh about, now, was related to us by a friend of ours whom upon hearing that we had had our baby, asked my mom, "What did they have?"  My mom, still smarting and overfilled with the emotion of being a new grandparents of a child with Down syndrome said, "They had a Downs!"  She never did tell our friend that we had had a boy!
Sincerely,
Ned Drinker
Posted by The Drinker Brothers at 10:06 AM