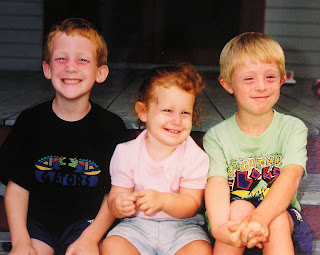 On the steps of Curlew Cottage
Beach Haven, NJ
This may not sound like news to you, but for Daniel Drinker and his family, friends, classmates, teachers and school administrators, this is a major event.  Daniel, oldest of the three children of Ned Drinker (tax accountant in Gulph Mills), is ten years old, has blonde hair, blue eyes and loves to swim and perform.  Daniel also has Down syndrome.  Beginning in September, Daniel will attend the fourth grade in his neighborhood school, Colonial Elementary in Plymouth Meeting, PA.  He will be the first student with mental retardation to attend any school in the Colonial School District as an "included" student.  That means he will not be in a segregated class or pulled out for special treatment.  He will be treated just like the other children in his class, but "with support." He is supposed to get the support that he needs to function in a normal environment.  To facilitate this inclusion, the number of students in his class has been kept lower than the average in the school and an aide has been assigned to the room, not to hover over him, but to allow the teacher or the aide to spend extra time with Daniel, when necessary.
For Daniel's parents, Ned and Diane Drinker, the move to full inclusion sounds promising but raises great fears.  Says Ned, "Daniel will feel just great being treated like everybody else.  For the first time in his life he is going to the same school as his brother William (age 9).  This increase in self-esteem, by itself, might ease Daniel's transition into a normal setting."  Diane frets, "Daniel's speech problems are so great that we cannot understand him some of the time.  How is he going to survive in the schoolyard?"  Ned elaborates, "Several years ago I coached a soccer team that Daniel and William were both on.  We all tried hard to include Daniel, but he just couldn't play at age level; he would just stand there.  He ended up getting frustrated, throwing all the balls down the hill and pulling his pants down.  He did not make a lot of friends."
Even so, Ned is investing his hopes and dreams in the inclusive model.  "We've fought for the last two years, all the way to federal district court, to keep the school district from sending Daniel to a "special class.  But instead of having learning disabilities, most of the students in this class were socio-emotionally disturbed.  One used to throw chairs at the teacher.  No kidding.  Daniel would have learned nothing but bad behavior.  I learned from this experience that there is no sanctuar; the best hope for the special student is in the normal population.  After years of being a separtist, I am finally becoming a hardcore inclusionist."  If Daniel and his normal peers can learn to get along in class, and maybe even develop friendships, Daniel's future will be much brighter.  Ned concludes, "Theoretically, I see that inclusion is the best way to educate all children.  As a matter of fact, only by educating our children in this way can we expect to fully integrate our society, for all types of differences."
written by Brian Courtney
Posted by The Drinker Brothers at 11:36 PM

Very interesting, I had no idea that Dan was one of the first students to start inclusion. Having an infant son with ds and a h.s. teacher I am not sure what to think about inclusion. I really have mixed emotions but it is great to read this article and hear your insight. I think that Dan did VERY well and makes inclusion look very successful!! Did Dan have a resource class? With the rise in Autism rates I am wondering how they are going to "group" students. It scares me-I lose alot of sleep over this. How well does Dan read? Is he going to vote? (That is one of our goals someday for our son). Feel free to email me anytime, since I can't get Will to reply back to me! But I understand! Just thanks for the great web site. I wish that there was something I could do for Dan since he has given me a gift of great insight as to what is ahead for my son. Great experiences!-- I am not trying to downplay ds but the videos are very inspiring.

gapeach,
First of all, Dan is my older brother. Let's straighten that out right away. He'll tell you that although I may be taller, he's my older brother. For the rest of my response I'd rather contact you via e-mail. Send an e-mail to dandrinker@gmail.com and I'll gladly answer you questions.

I am writing from Asuncion Paraguay, Southamerica....I am impressed with the story of Dan! I have a seven years old son with DS, Alejandro. Here in my country everything is very difficult for children with special needs but still he is attendind Kinder 5 at a regular school. You brother´s story has encouraged me to keep fighting for Ale, thanks a lot and congratulations. Maria Lourdes llamosas, maloullamosas@gmail.com