CLICK HERE to watch this scene on You Tube
All week long, Dan has been planning a date with Sarah. This evening's plan was dinner and bowling. After Sarah arrived, our friend, Evan Cuttic called and invited us to see the Philadelphia 76ers play the New Jersey Nets. Evan is home from Penn State for Easter, in town just for one night and when he acquired free box seat Sixers tickets, he called us. Dan and Sarah happily shelved their bowling plans for a date downtown. My favorite moment from this scene is the shot of Dan standing at the bar waiting to be served. I fall to pieces when I see that image. I imagine a mother might feel something similar watching her daughter board the bus on the first day of school, wanting to help but knowing she has to do it on her own. For me, it's a proud sort of "look, there he goes" feeling.
This is, as far as I am concerned, his first time ordering a beer at a bar. In the past he has walked around a party with a beer more as a prop, to fit in with everyone else who is drinking -- he only would have a few sips because it was only for show. He usually does not like alcohol, it makes him feel "dizzy". Tonight, he finished his beer. There was something about the entire evening that was so spectacular to Evan and I that we don't quite know how to put it into words. I came away from tonight with nothing but respect, love, and awe for my so very big brother. 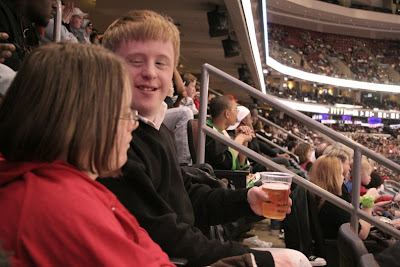 Photo by Evan M. Cuttic
Posted by The Drinker Brothers at 5:01 AM

I wanted to let you know that I love this site. I found it yesterday because of Dan's Barack Obama endorsement (I'm with ya there, Dan! He's the guy!) and have become enraptured with your stories.

Thank you for sharing these moments with us all, I've cried and laughed so far! Keep it up!

Dan is so much fun! This video captures so many things going on, the magical feeling of love between Dan and his sweetheart, the rite of passage of ordering a beer and getting CARDED by the bartender, and of course the whole spirit of a Sixer's game! I wish that I had a cool brother like Dan!!

This is a totally cool blog and I have been watching most everything here since I discovered it from America Blog.

Thanks for sharing your life with us Dan! You have such a great happiness around you...it is infectious!

I look forward to many more visits over the coming months!!!

Hi Dan! Your a Sweetheart!
From,
Valerie

Dan, That was an awesome date!! And what rythym you have dancing.

Dan,
I wish that all of us could express our emotions in such a fearless honest way. The world would be a better place! Thank You for this blog, it always brightens my day and reminds me of what is most important in this life. Sara is a lucky girl!

I have to say thank you! your stories and videos of your brother are so wonderful. I am a mom of a 2 year old with DS and your brother is such an inspiration!! Your love for him is amazing as well!! Thanks for all the great stories!!

Just found your website and I love it!! The video of Dan and Sarah at the Sixers game is great. I watched the video and could see my little guy there in 20 years. Thanks to both of you for sharing your life with others.

hi dan/ hope u feel better. missed ya at work 2day/ hope u have fun @ acme 2morrow. come back to work soon.
from valerie