My Brother Lifts Me Up 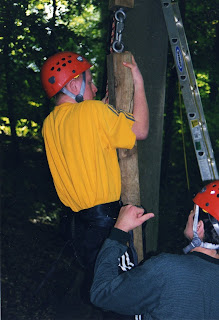 When I was a boy, I was terrified of virtually everything. My brother, Dan, has always acquired my fears for himself. Today, long after my fear of dogs has evolved into a love, Dan remains afraid of dogs. One fear of mine lasted long after dogs.  I was forced to confront it at Camp Swatara every summer when we were given the chance to scale a great climbing wall. As a camper I never could make it to the top. The first year Dan was a camper at Swatara I was his one-on-one aide, a counselor in training. As with every summer, the afternoon arrived where we all put on harnesses, learned how to tie special knots, practiced trust falls, and gathered beneath the great climbing wall that had eluded much of my childhood. Dan and I had walked past the wall before and Dan had made it abundantly clear he would not be climbing it. I had done my best to psyche him up as we approached the climbing day but he was staunchly opposed.

Back below the climbing wall, I found myself to be something of a hypocrite. How could I make him do something I was too afraid to do? As I was preparing to belay him up the wall, I saw a look in his eye that said, “Please, don’t make me do this”. After a moment, I rearranged our ropes and switched places with him. I instructed another counselor to help him belay me and took my first position on the wall. As I climbed, Dan tightened his end of the rope, keeping me snug in my harness. Halfway up the wall it occurred to me that this was not a fear I had outgrown. I stopped and looked down at my brother. We were tied together. He was keeping me suspended two stories above him. “Yeah, Will!” he shouted. I continued to climb. It slowly realized the mess I'd gotten myself into. The irony, the symbolism, and the humor failed me at the time.

Three quarters to the top, I slipped. Dan caught me. I hung in the air for a moment, terrified, doing my best not to show it. That’s when I looked down. Dan was so small. For some reason, from the ground no one on the wall looks small, but from the wall, everyone below seems so far away. Dan sensed my fear. “Go, Will!” I found my footing and began scanning the holds, plotting my final ascent. I knew what I wanted to do but my body was paralyzed. I began to tremble. On previous attempts, this was where I always threw in the towel and repelled down slowly, in shame. I held tightly to the wall, and hoped no one below could see how violently I was shaking. By now, Dan had rallied all the other campers and counselors to cheer me on. Shouts of encouragement cushioned me as I hung on for dear life.

Just then, I felt a tug on my rope. My body jerked upward. Dan, who is very strong, was pulling on our rope, raising me higher. This caused me to lose my footing, but forced me to focus. He pulled again. I went up another foot. I grabbed the wall once more and making a conscious effort not to look down, I climbed to the top, my brother pulling me the whole way. When I smacked the top of the wall with my palm, Dan’s cheer was most notable among the rest. It was like touching the sky.
Posted by The Drinker Brothers at 2:25 PM

That is a hilarious yet touching story! Little brother Dan came through and had "your back" this time. I hope that you will take some footage as to the aspects of the sibling relationships. You slightly touch on it-but it would be very interesting. I can tell there is a deep bond and love between the siblings in this household.

I have been reading your website all day after discovering it on The Assimilated Negro website. THANK YOU SO MUCH, Will and Dan, for sharing your story. I am so moved by these vignettes and look forward to the full length documentary.