Chronologically speaking, this scene follows Coping With Death and Discussing Dan's Transition. If you haven't seen those, I suggest you do before you check out this one because you'll have more context.

Click Here to watch this scene on You Tube


Plymouth Whitemarsh high school was Dan's world. He loved going to school. When he was ill he would hide his symptoms and feign health in order to attend class. In 2005, Dan's friends and classmates graduated. He stayed at PW one more year because he could stay in public school until he turned 21. Therefore, in 2006, all his friends began college while he attended high school one final year. At the Class of '06 PW Picnic, he really only knew the faculty and staff. Had it been the Class of '05 Picnic, he would have been the star of the show. After all, they'd voted him king of several of their dances. Dan made due at the '06 picnic, of course. Once he was able to obtain his yearbook he found a way to fit right in. 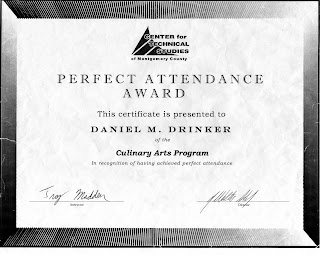 Click to enlarge
Posted by The Drinker Brothers at 11:28 PM

I just watched all 3 clips in a row. At times, I felt sadness, but I finished with a smile. This is such a great project. I continue to love everything I see.

I can remember all those awkward moments of yearbook signing -- signing and asking to sign. Not an easy thing for me to do. It must have been hard for Dan not having the same connection to this year's classmates. But he did good, non-the-less. Why would I expect anything different from Dan Drinker? ;)

I can see why he loved that school, he seemed to be just one of the kids, even though they were not his closest friends that year. Good thing he got his yearbook. An emotional day in so many ways for Dan.

Please tell him that he's awesome!

This brings back so many memories. Dan so much reminds me of my brother George (dx Down syndrome) at that age, particularly in his amazing dancing. George could do all Michael Jackson's dances down to the smallest details. I am just a puddle of tears. When my brother George graduated from high school in 1982, I so remember the mixture of excitement and sadness that last day. Our mother had passed away in 79 and our father was ill (he passed away in 83) so George was living with me and my husband and life was changing too fast for him. He often asked to go back to visit his school and his teachers. His teachers would call and invite him back to dances well into his thirties! He turned 48 yesterday and is still going strong. I love your page as it is always a trip down memory lane for me!

Love to both Will and Dan.

That has to be the most amazing video i have ever seen. I WAS POPULAR....but NEVER that popular. GO DAN DRINKER...YOU ARE THE BOMB BUDDY!!!